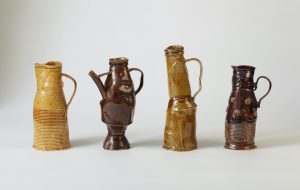 The Wakelin Award is given annually to a Welsh artist whose work is purchased for our permanent collection.

The recipient of this year’s Wakelin Award is ceramic artist, Philip Eglin whose work has been selected by Andrew Renton, Keeper of Art at Amgueddfa Cymru-National Museum Wales.

Phil worked for many years in Staffordshire, and now lives with his family in the Swansea valley near Abercrave where his studio is based.

Phil has earned an international reputation working with clay, and absorbs historical influences drawn from 16th century painting, English medieval pottery and the flat-backed figurative ornaments of Staffordshire. Ever since his student days in the 1980s, Eglin’s reference to art from the past has been brought firmly into a contemporary context.

The Wakelin Award is administered and supported by the Friends of the Glynn Vivian and funded by donations in memory of Richard and Rosemary Wakelin.

The presentation will be made on Saturday 4 February at 4.30pm.